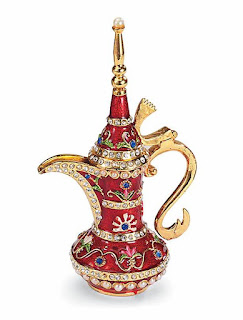 Tech heavyweight Chip Davis first encountered Rufus when cleaning up a teapot he'd purchased at a yard sale as a birthday gift for his mum. At the time, the weathered fifty-cent teapot was all Chip could afford.

Upon learning there was a genie within the kettle, Chip released him (Rufus) on the condition Rufus grant the standard three wishes as stipulated by the Sentient Congeniality Act of  17 R.C. (Recorded Chronology). Cleverly, Chip wished for health, wealth, and three more wishes, culminating with the request for three more wishes each time a new round of three was granted. He even used one of his wishes to change the wording of his requests from "wish" to "desire" to ensure he never lost a wish by casually saying something like "I wish I had a side of ranch to go with these fries." His system worked splendidly, and he never slipped up.

At first, Chip was over the moon to have his own personal genie around. Rufus didn't take up much space, having selected a Havana cigar box as his personal habitation, the aroma of the tobacco bringing him happy memories of millennia gone by. Thanks to Rufus' wish-granting, Chip quickly became hugely successful, famous, and better looking, with a bevy of love interests vying for his attention. Rufus continued to live with him, ducking into the cigar box when Chip had company. Given Chip's poor health and propensity to be absentminded, he appreciated having Rufus on site to remind him when to eat, when to exercise, when to take medication, and where the heck he'd misplaced his inhaler.

The only fly in the supernatural ointment was that Rufus, being a self-proclaimed know-it-all, talked incessantly, offering opinions on topics Chip never asked about. It drove Chip nuts! Additionally, Chip worried about Rufus' existence being found out. So when the day came that Chip could no longer handle Rufus' blathering, he used one of his available wishes to take away Rufus' ability to speak. Chip then used a second wish to banish Rufus to the internet where he would no longer be at risk of being discovered.

At the time, Rufus had been complaining ad nauseum about what he viewed to be the shoddy state of the Appraisement Cycle proceedings at the academy. Rufus claimed he could do better. Chip told him to prove it. Rufus then outlined a series of questions which he claimed would be all he needed to properly assess a recruit's element proclivities. Once this site was up, Chip sent Rufus to live here. He then locked the site with a password only he knew.

Two weeks later, Chip was found dead in his secluded mansion, having expired after suffering a fatal asthma attack, his inhaler under a credenza in a room on the other side of the house. When cleaning out his home, Chip's mother found a sticky note on the bedpost of Chip's California King. The note read RufusOpines followed by a web address. She forwarded it to her regional dimensional Custodian who arranged for the site to be housed on the academy's servers. Rufus was found.

Far from feeling trapped, Rufus revels in running this site and having the opportunity to use his knowledge and opinions to steer others toward their natural element. His communication is limited to the programming put in place by Chip--programming suggested by Rufus himself, but that doesn't stop him from positing his views.

When you're ready, settle in for an 8-question session with Rufus to see what he suggests. It goes without mentioning, Rufus' opinions do not represent those of the ocademy's administration or its affiliates, and you should not feel compelled to heed his advice. Element attachment is a commitment not to be taken lightly, with relationships that will last through the ages. Thus, you should go where you feel you're truly in your element.